There’s always a good turn out at the Festival of Speed, including modern motorsport beasts and the great classics.

Historic Motor Racing at The Festival of Speed 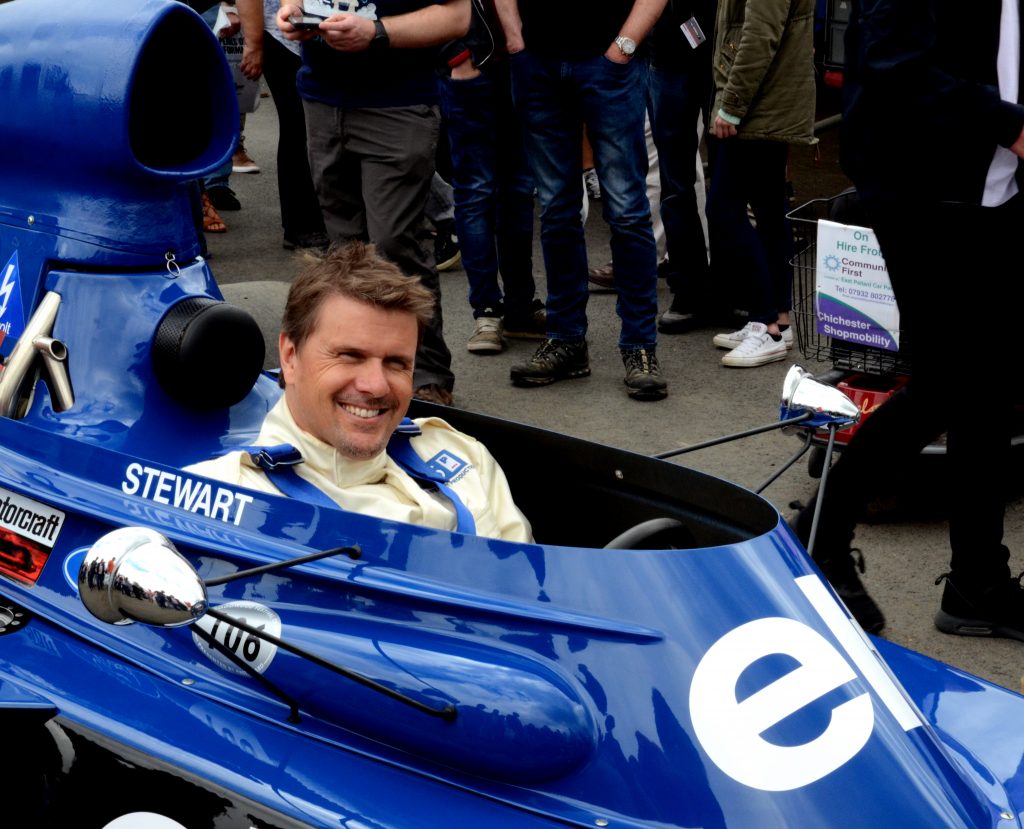 Formula 1’s aerodynamic revolution, in the early 1970s, is exemplified by increasing the size of both the wings and the airboxes in successive Tyrells. The 006 took Jackie Stewart to his third title in 1973. The following year greater restrictions were placed on these ‘laid-back’ wings. Entered at Goodwood, by Sir Jackie Stewart,  and driven here by his son Mark Stewart. Mark is waiting to enter the holding paddock. 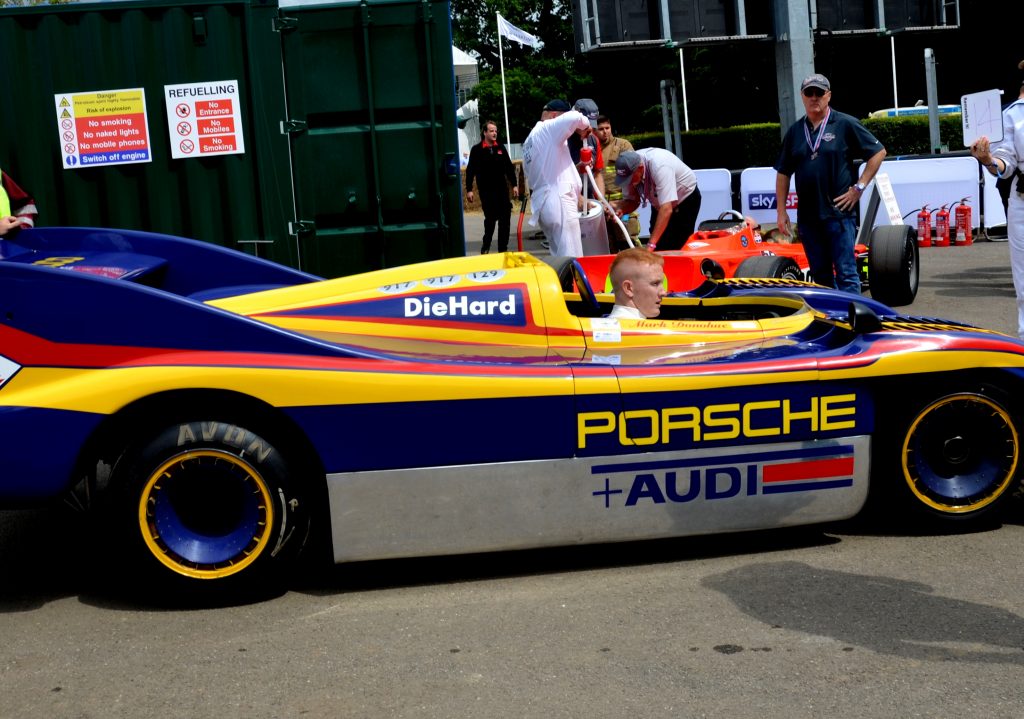 Entered by The Porsche Museum in the Americana Class. The Porsche 917/30 produced up to 1500 bhp on full boost, and around 1200 bhp in race trim. It completely dominated the 1973 Can-Am season. Mark Donohue drove to victory in six of the eight rounds. To rein in performance, Can-Am imposed fuel limits on these turbocharged cars in 1974. 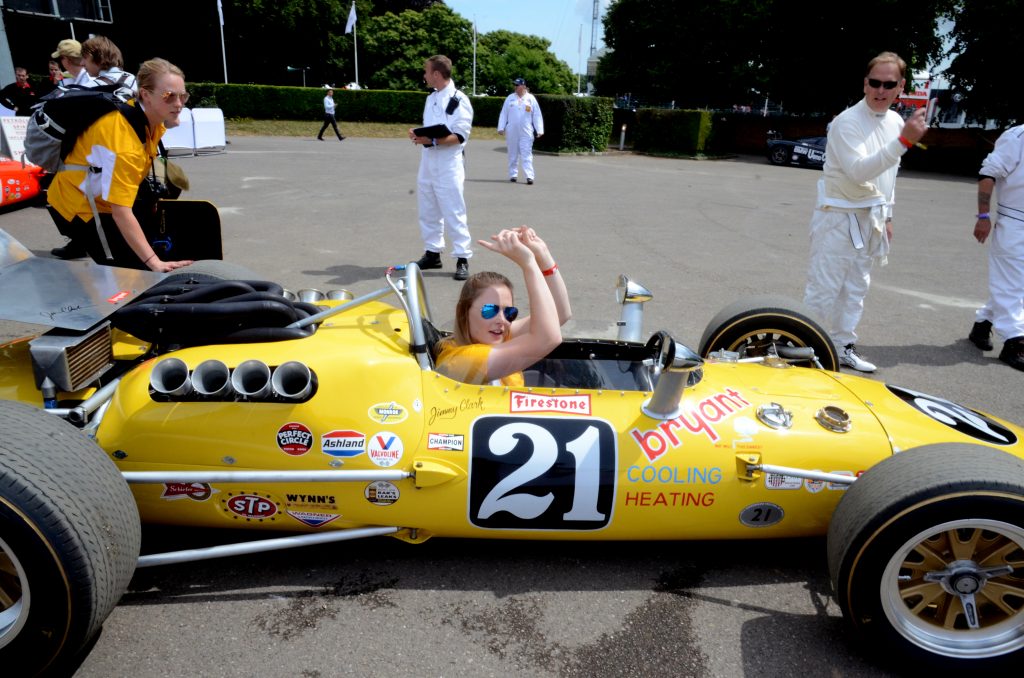 Having built this stylish racer in 1967, engineer Rola Vollstedt managed to secure the services of Jim Clark. He drove the Vollstedt Ford, at Riverside Raceway, for a round of the USAC series. Clark led the race, his last in the US, until missing a shift and damaging the engine. 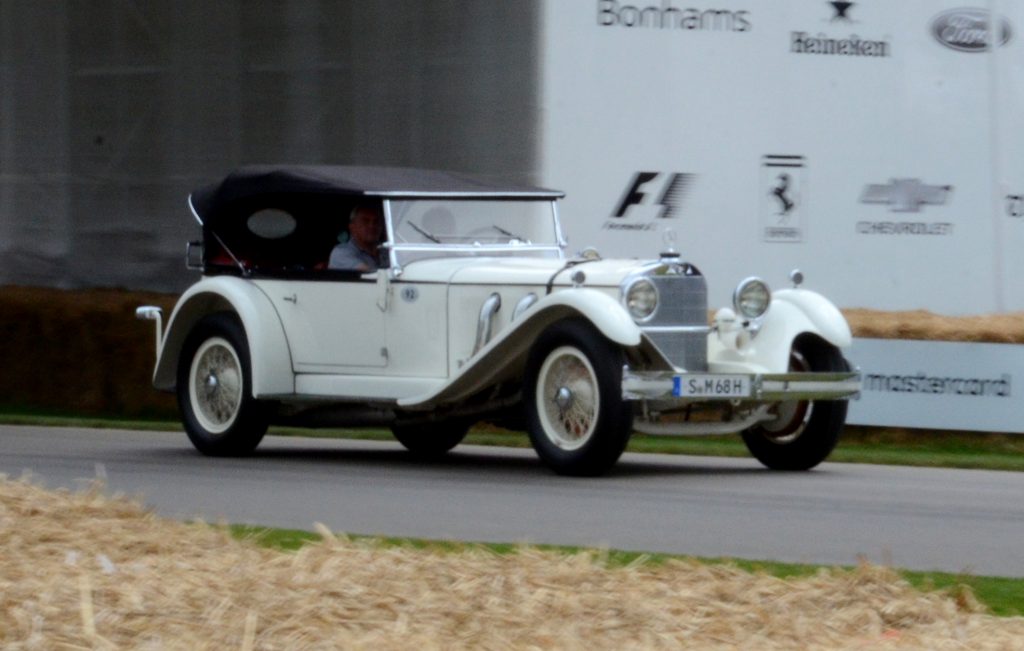 Entered by Mercedes-Benz Classic, driven over the weekend by Jochen Mass. The 1928, 6.8 litre, straight-six, supercharged Mercedes-Benz Type S was one of the vehicles destined to become known as a ‘White Elephant’, due to its size and the team’s racing colour. The supercharger’s howl was also reminiscent of an elephant’s cry. It took Rudolf Caracciola to many victories. Shown here coming down the hill, towards the start, ready for the hill climb. 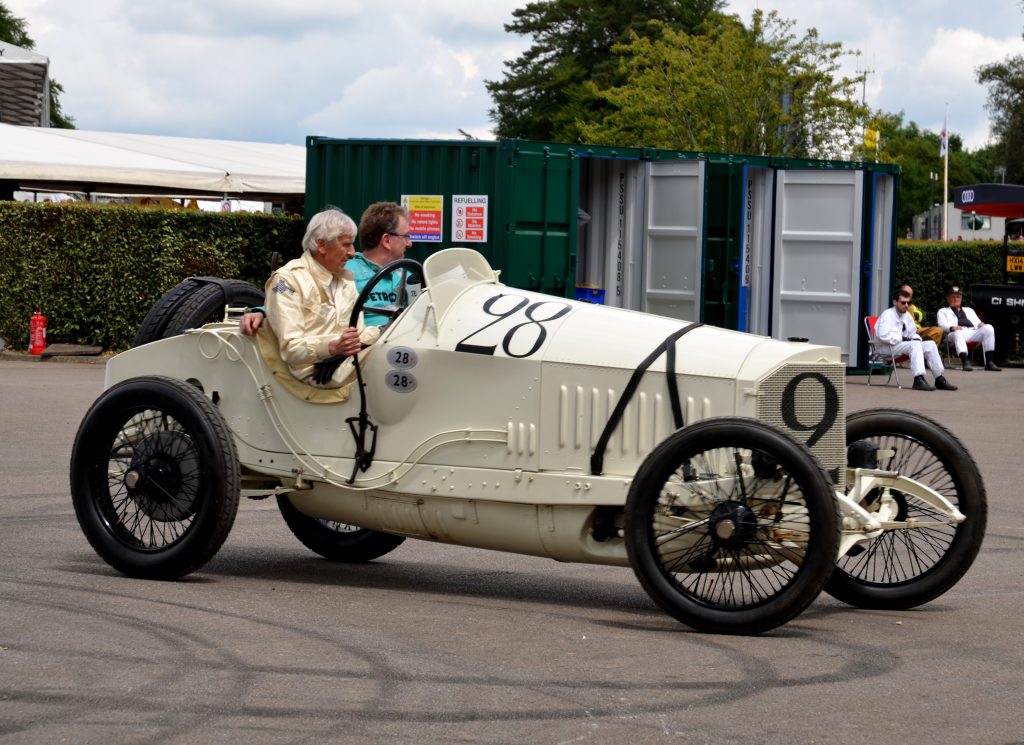 Mercedes dominated the 1914 French Grand Prix, taking first, second and third place. The new engine in the Mercedes Grand Prix, 4.5 litre, four-cylinder, revved to 3500 rpm. The winning car was sent to England for publicity purposes, but was confiscated when war broke out. Its design inspired the Rolls Royce Hawk aero engine. Shown here in the holding paddock, this car was driven, during the Festival, by the entrant George Wingard. 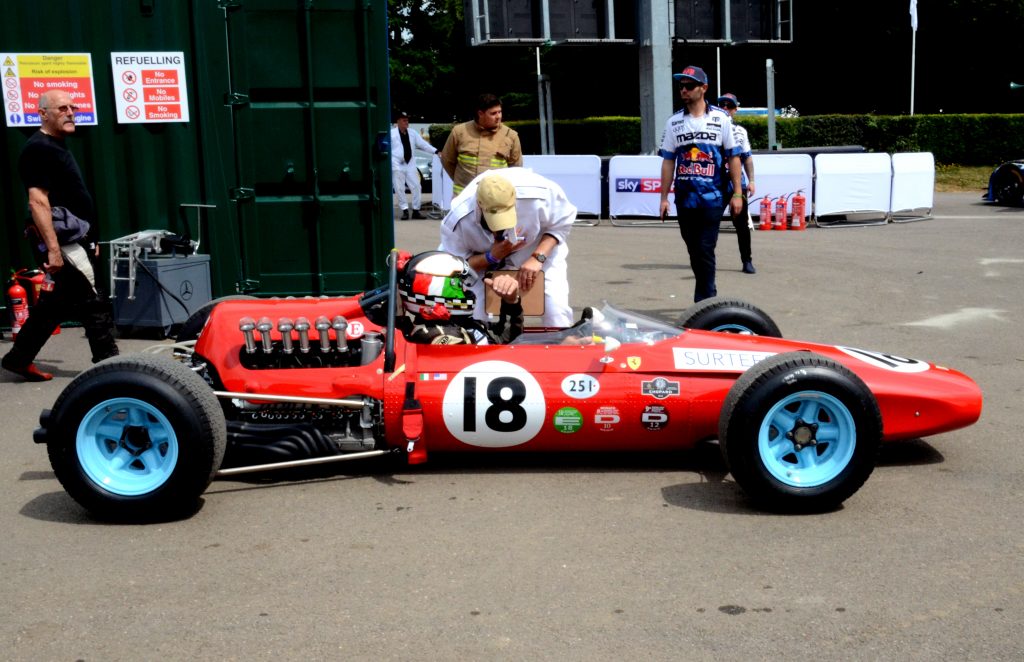 Shown here entering the holding paddock is the Ferrari 1512, 1.5 litre V12, driven by Joe Colasacco. Featuring the same Type 579 tubular steel chassis as the 158, the 1512 differed from its sister car due to its extra four cylinders, and consequently 220 bhp rather than 210 bhp. Ferrari entered 1512s in both the 1964 and 1965 seasons. The car did not record any championship victories. 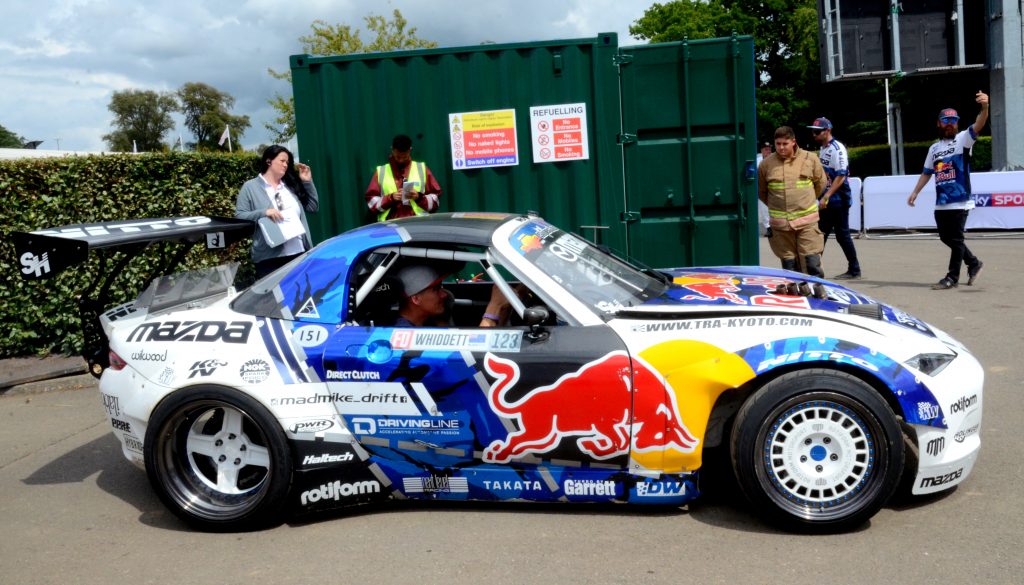 Having previously amazed the Festival crowds in an RX-7, New Zealander ‘Mad’ Mike Whiddett, returned with a new car. The MX-5, entered by Red Bull in the ‘Catch My Drift’ class, and built in 2016, featuring a similarly brawny, quad-rotor engine with more than 1000 bhp. Before he started drifting Whiddett competed in Freestyle MotoX. 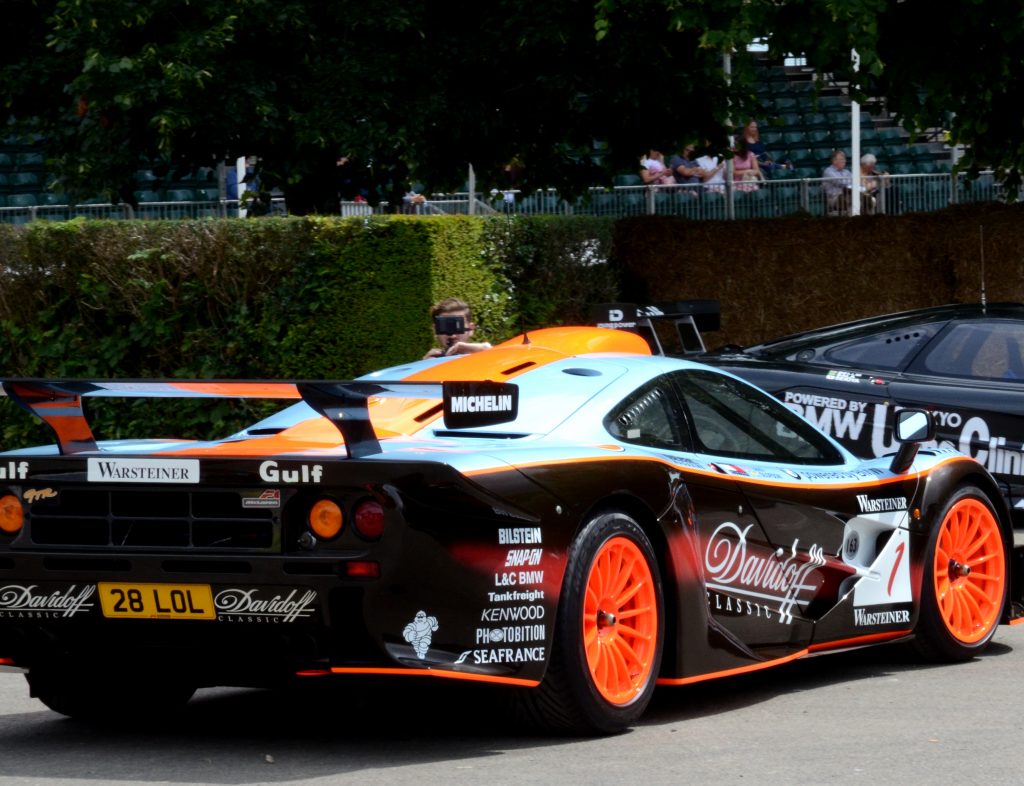 To stay competitive the McLaren F1 GTR, 6.0 litre V12, was turned into the ‘Longtail’, with extended bodywork and more aero. Shown here in the holding paddock at the Festival of Speed, and driven by Lionel Robert. 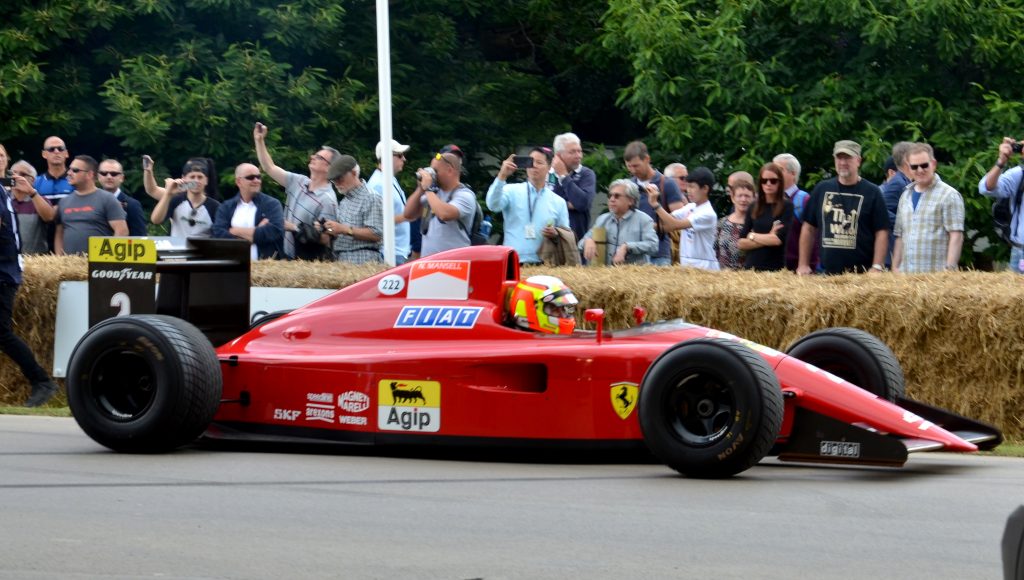 Some Ferrari type numbers are easy to decode. With the Ferrari 412 T1B, the ‘4’ represents the number of valves per cylinder, the ’12’ is the number of cylinders, and the ‘T’ represents the transverse gearbox. The 412 T1B was a regular podium contender, in which Gerhard Berger was victorious in Germany. Shown here in the holding paddock at Goodwood, entered by Christian Overgaard.